Workplace Stress And The Role Of Low-level Poor Behaviour 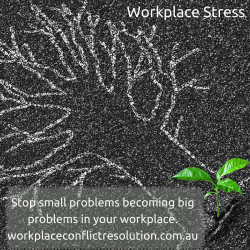 Often in the workplace, staff members exhibit ‘poor behaviours’ that may not be serious in isolation but can often lead to workplace stress because of their persistent nature. This can include such things as banter with other staff, comments about peers, being unnecessarily loud, interrupting other staff who are working, inciting competition among team members or similar behaviours that might normally be considered harmless as a one-off event.

If left to fester, such behaviours can be destructive to the team environment and lead to divisiveness and even a complete breakdown of the team culture. Yet managers often tolerate such behaviour and allow it to go unresolved.

Regardless of the reason, managers should not be allowed by their manager to avoid addressing the poor behaviour of a team member.

An aware manager will notice such behaviours and rather than putting up with them, will nip them in the bud early. Doing so will create a more positive team culture.

In such an environment, team members will be respectful towards each other and sensitive to the impact their behaviours have on their peers. This in turn leads to improved performance and collaboration amongst the team.

Because the cause of the problem can often be subtle, managers need to attune themselves to the team dynamic to identify the presence of tolerations.

Once a cause is identified, it’s incumbent on the manager to address the issue.

By keeping the small problems in the workplace in check, you can reduce workplace stress and empower your team to better deal with the bigger problems and challenges that come along. This is typically where the frustrations are vented but, if the frustrations don’t develop in the first place, the team can work together in a more constructive manner.

To help keep your team collaborative and communicative, consider subscribing to our short series of Communication Tips. Sharing these will your team will also reduce stress in your workplace.