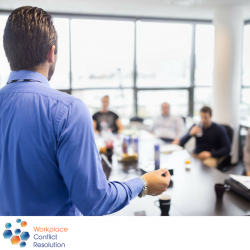 Workplace conflict between staff, if left unchecked, tends to escalate – but most managers have a natural inclination to dismiss it.

Employees are often promoted to management positions because they have particular skills – which are usually technical as opposed to interpersonal – and a certain level of resilience.

They tend to cope well with workplace conflict situations themselves, so they often assume others will, too.

People in management positions can tend to view conflict among their staff as trivial, because they themselves have quite a resilient approach to incidents and issues, so [they] don’t understand what the big deal is for their staff.

Although they are well placed to help workers identify and overcome the source of their conflict before it escalates, they are more likely to “walk away from it”, tell staff to simply “grow up” and “get over it”, or label it as a “personality clash”.

The personality-clash label is a common excuse to ignore conflict.

It’s almost like, ‘Well, we can’t do anything about it if it’s a personality clash’, but what I see happening is that – if we assume it’s two people that have this personality clash – it just tends to niggle away at every interaction they have with each other, and then it spills over to having a negative attitude in the workplace.

I also know of situations where people have been in conflict and it hasn’t been the people in conflict who have left, but the people external to the conflict, because they can’t cope with what’s going on in the workplace and the fact no one’s dealing with it.

Although some workers will be able to resolve conflict without assistance, if they could have done that in the first place then it wouldn’t have come to the manager’s attention..

For this reason, all conflict that a manager notices – no matter how small – should be addressed.

Another unhelpful tendency is to force resolution.

Many managers who do deal with workplace conflict take a directive, authoritative, settlement-oriented approach.

This is unlikely to achieve a lasting resolution.

Very often managers will sit two people down and go: “Right, you did this, she did that, he did that, whatever, OK,” and consider the matter closed.

The [employees] haven’t actually come to the agreement or understanding themselves. It’s the manager who’s directed it and seemed to get settlement.

But because conflict is one of those things where, if you try to push it down in one place, it surfaces somewhere else, it needs to be dealt with, not suppressed. Ensuring your managers receive adequate conflict management training can help reduce these incidents.

In most cases, conflict that escalates and damages productivity and morale could have been prevented.

In the work I do, I’m called in because the conflict situation has been dismissed and hasn’t been dealt with properly…

As I go through a grievance investigation, I think this all could have been avoided if the manager had dealt with the conflict in the early stages.

The manager could say he or she was “too busy” to address the matter, yet five minutes spent helping to improve the communication or the insight between these two people could have saved so much time and headache and stress.

The key to resolving conflict early is improving communication and helping each party to consider the other’s point of view.

A lot of conflict is caused through misunderstanding.

Teaching employees to communicate assertively, and ask questions that clarify meaning, can help them to better understand each other and avoid wrong assumptions.

This Workplace Conflict Resolution article, written by Catherine Gillespie was originally published in ‘hrdaily‘ in March 2011.

Conflict In The Workplace And The Key To Setting It Right

Monthly News and Tips for Managers and HR Professionals

Conflict In The Workplace And The Key To Setting It Right
The Role Of Generosity In Mediation
Adverse action claims – are we likely to see a spike?
To Investigate or Mediate?
Eddie McGuire and The Bystander