To Investigate or Mediate? 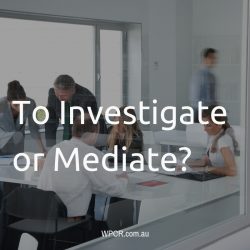 To investigate or mediate?

Sometimes managing staff can seem like a test of one's skill to be able to delicately  walk on eggshells, particularly when one staff member starts making veiled complaints about another.

No manager should dismiss or ignore such comments, avoid the conversation, or offer comments of consolation or agreement (either implicitly or explicitly).

If a staff member makes a complaint to their manager, then the manager should be prepared to hold that staff member accountable for what they are alleging. Every manager should rely on being guided by the process outlined in the organisation's grievance policy and not their own preference for how complaints and aggrieved staff should be treated.

Typically, a sound grievance policy would recommend one of four steps be taken:

1. For situations that do not involve allegations of unlawful behaviour, and where the complainant feels safe, the complainant should be directed (and coached if needed) to approach the respondent for a confidential informal discussion. This is often referred to as 'self management';

2. Where the complainant does not feel safe or where self management has been attempted but the complainant alleges the inappropriate behaviour by the respondent has continued, the manager should conduct a brief, informal investigation and bring the two parties together to facilitate a resolution discussion (in which the two parties discuss their concerns and reach resolution - not in which the manager speaks for 90% of the time and determines and imposes a resolution for the parties);

3. Where the manager is not a skilled Mediator, or the parties have been engaged in a lengthy or complex dispute, or where there is a conflict of interest or perceived bias in having the direct manager or another internal manager conduct the mediation, the organisation would be well advised to engage an independent, accredited workplace Mediator; and

4. For allegations of misconduct, unlawful conduct or serious misconduct, a preliminary internal investigation should be conducted.

4a) If the preliminary investigation reveals there is no substantial merit in the allegations, or there is not enough evidence or information on which to conduct an investigation, it is often more appropriate to support the parties to mediate than continue with a formal investigation. Other outcomes such as training or 1-1 behavioural change coaching may be instigated.

4b) If the results of this preliminary step identify concerns or risks or the existence of evidential material  such that  substantiated allegations would lead to the application of a disciplinary process, a formal investigation may then follow and should be conducted by a trained, experienced Investigator who has not been involved with the parties during in any stage of the preliminary processes.

Often when the  words 'bullying' or 'harassment' are used in an allegation, Managers skip steps 1 - 4a and assume a formal investigation must take place.

This tendency to act is understandable given that if bullying is occurring, there is a serious and unsafe situation at hand. Some forms of harassment can be unlawful and discriminatory.

However, more and more often workers are making allegations of bullying or harassment (often referring to both for the one incident even though these two terms have different meanings and not one combined meaning) because they feel aggrieved and not necessarily because the behaviours allegedly being displayed by the respondent are of a serious nature. In such situations, mediation and not a formal investigation may be the best resolution option.

It is also important to consider that if a preliminary investigation reveals:
A) the allegations may be vexatious, malicious or hold no merit whatsoever, a formal investigation may be required to support disciplinary action against the complainant; and/or
B) the matter may involve (currently or at a later stage) some adversarial court based action claiming, for example, a breach of contract or the possibility that a worker may submit a complaint to a State or Federal Commission;
then a formal investigation should be conducted.

Our clients have often stated they would and have relied on using WPCR investigation reports as evidence in Fair Work Commission hearings.

Should your organisation require independent, experienced investigation or mediation services our team of professional consultants are ready to help with the assessment of the complaint for the best choice in managing and addressing a worker's grievance while minimising risk to the organisation.

Managing Narcissistic Behaviour in the Workplace