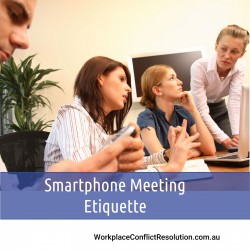 We have all seen signs in stores and at service counters alerting customers they will not be served if they are talking on their mobile phone. We all know there is an etiquette associated with the use of mobile phones, but did you know the use of these devices could also be causing conflict in the workplace and potentially harming your career?

I have conducted a number of mediations in which discussion has moved to the use of a mobile phone during meetings and the conflict this has created between the parties.

This anecdotal evidence has now been supported by research[1] which shows that above 80% of respondents think it is inappropriate to take calls or text or send emails on your mobile phone or tablet device during meetings.

What is the issue with using a mobile phone in a meeting?

Using a mobile phone during meetings creates conflict because it demonstrates to the other party that the user is not being respectful, is not paying attention, is not interested in the content and doesn’t think the meeting content is important for them.

This can lead the other party to start to make assumptions that the mobile phone user lacks self awareness, because if they knew how their behaviour was perceived by others and how it was impacting the effectiveness and efficiency of the meeting, they wouldn’t continue to use their phones. There is also an assumption that the mobile phone user lacks self control because they can’t resist checking their phone each time there is a ‘ping’ alert.

“The study also found that Millennials* are three times more likely than those over 40 to think that smartphone use during meetings is okay, which is ironic considering Millennials are highly dependent upon the opinions of their older colleagues for career advancement. TalentSmart has tested the emotional intelligence of more than a million people worldwide and found that Millennials have the lowest self-awareness in the workplace, making them unlikely to see that their smartphone use in meetings is harming their careers.”

What is the lesson about smartphones in meetings?

The take away tip is to do yourself a favour and be smart.  Show a higher level of self awareness and be respectful by leaving your smartphone on your desk when attending workplace meetings. And if conflict does arise as a result of smartphone use, you might want to try a self-managed approach to resolving the conflict.

Conflict In The Workplace And The Key To Setting It Right