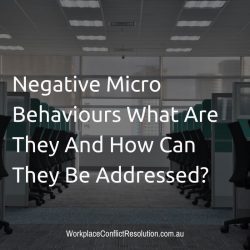 In an HRM article (September 2021), a consulting workplace psychologist identified 8 negative micro behaviours which lead to interpersonal tensions and conflict.

These behaviours were identified as:

Compared to bullying, discrimination and sexual harassment, ‘micro behaviours’ are often interpreted as being less serious but more difficult to address because micro behaviours present as personal traits, which may have been evident for an extended period of time and never been addressed.

Someone who complains about a colleague’s micro behaviour is typically asked to ‘ignore it’, ‘get over it’ or focus on managing their own reactions to such a situation. A manager rather than address the situation may try to appease the complainant or might even try to blame the complainant for getting upset about something trivial. How often have you heard a manager say, ‘It’s just Sam’?

The best resolution process to address the display of negative micro behaviours is three fold:

Why I Was In Conflict With You