How to Manage Anonymous Workplace Complaints 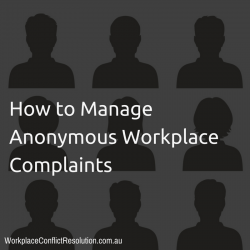 We’ve put some focus in recent months on workplace investigations through our series of videos outlining frequently asked questions on the subject. Today we’re covering a question that wasn’t covered in the series but which has arisen a few times and which we have had some success in addressing - How to manage anonymous workplace complaints.

Below is a video (and transcript) I recorded following a client raising the issue with us. Here are the key takeaways from the video:

If your business is is experiencing anonymous workplace complaints or you wish to ensure your policies are robust and that staff are aware of the policy regarding anonymous complaints, please contact us via phone (1300 227 901) or email for more information.

I've just arrived at the airport after having visited a client who's been receiving a number of anonymous complaints via email, and they're unsure what to do with those complaints. What they do know, is that if the allegations would be substantiated through an investigation, they would form a breach of policy. So they can't really just sit by and ignore these anonymous complaints, but how do you move forward when you don't know who the complainants are, or if it's the one complainant or many complainants, if you don't know whether it's a current or past staff member, or somebody associated with a current or past staff member?

So we've had quite a bit of success in this area with working with companies where they've received anonymous complaints. And two of the main processes that we use, is conducting a cultural investigation where a number of staff in the hierarchical organisational chart are identified and interviewed and asked generic questions on their perspective of culture, leadership, management, operations, work flow, and usually there's a lot of valuable information comes out of ... you know, which is really good for a company to work with, as well as, positive things that are reported back as well.

But staff are also made aware, before they participate, of their requirements around confidentiality, and also that if they raise a complaint against a specific respondent, that complaint may be investigated, and if so, their name and the allegation will be put forward to the respondent to fairly be able to respond to.

The other way that we've had success is to be able to run a similar survey, but through an online portal such as an online survey, where staff, again, are invited to give their feedback on a variety of areas within the business. And again, notified of their confidentiality requirements and that if they do raise a complaint they need to identify themselves, otherwise the complaint will not be addressed.

Through both of those processes, we also remind staff and make it very clear that from this point onwards anonymous complaints won't be addressed. They do need to come through the complaints handling process of the business to see if we can start to channel concerns being raised through the appropriate mechanisms so they can be addressed properly. Anyway, this client is considering both of those options and is quite keen to pursue some form of investigation. If you've been receiving anonymous complaints and you'd like to know how to manage those, then please contact us and we'd be very happy to help you. We usually uncover a lot of information that's really useful for business, positives, negatives, understanding the perspectives of their staff, and we provide a report with really thorough and robust recommendations. So looking forward to hearing from you if you need support in that area with investigations of anonymous complaints.

What we can learn from New Jersey?