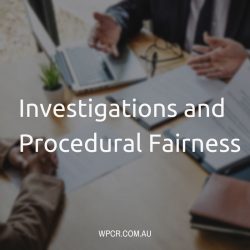 Understanding how to separate past investigated misconduct matters from a current situation is crucial in ensuring natural justice is applied.

As a result of the 2018 internally conducted investigation, these two employees were issued with warning letters. However no other disciplinary action was taken and neither employee was offered training or counselled about the substantiated misconduct.

Fair Work Commissioner Cambridge stated that had the employer acted upon the 2018 findings, disciplining both employees and providing training, ‘there was a strong prospect that the applicants would have adopted and maintained the generational and cultural changes that were required, and thereby they would have avoided the 2019 allegations, and the subsequent dismissals from employment’.

Hence it was found that the dismissal of the two employees was not sound, defensible or well-founded. The FWC ordered a total compensation amount of over $61K.

‘The Lesson’: Act on all informal/formal complaints promptly, allow staff procedural fairness in an investigation, and fully and fairly address any outcomes from an investigation at the time of the findings.

To Investigate or Mediate?

Managing Narcissistic Behaviour in the Workplace