FWC Findings And The Importance Of The Investigation 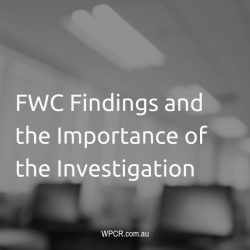 Minimising the risk of an unfair dismissal claim arising out of termination for serious misconduct.

If a poorly conducted investigation leads to dismissal, the business could find itself in front of the Fair Work Commission (FWC) with an unfair dismissal claim to argue.

The Fair Work Commission (FWC) will uphold an unfair dismissal claim (that meets jurisdictional qualifications) if the employment termination has been harsh, unjust or unreasonable.  A lack of natural justice, procedural fairness or due diligence allows the FWC to direct the employee be reinstated or direct the employer pay up to 6 months of the employee’s wage.

These recent cases demonstrate outcomes in situations where employers have not notified an employee their conduct could lead to termination, not given the employee an opportunity to respond to the accusations (with a support person available) or not followed reasonable investigation or disciplinary processes.

In this matter, the Respondent admitted it did not undertake an investigation but relied on rumour. The Commissioner upheld that divulging confidential information can be classified as serious misconduct. However, without proper enquiry and without giving the Applicant an opportunity to respond to the accusations, the Commissioner found the Respondent’s claim the employee had committed serious misconduct was ‘fanciful and spiteful’ and not a valid reason for termination. The Commissioner referred to the obiter in Australian Meat Holdings, that the lack of a proper investigation made the Applicant’s termination unreasonable.  The remedy to be paid to the Applicant was approx $12, 300.

The employer terminated Mr Gibbens’ employment on the basis of a lack of trust and confidence that Mr Gibbens would not again engage in disrespectful and discourteous behavior towards passengers after he had been spoken to on several occasions (following passenger complaints). The employer was of the opinion that continued incidents involving Mr Gibbens’ indicated that he could not or would not heed the significance of the complaints, the seriousness with which those complaints were viewed by his supervisors and he had not moderated his behavior accordingly.

The Commissioner found that while the Applicant had not genuinely acknowledged his behavior was disrespectful nor had he shown any remorse for his inappropriate behaviour towards passengers, the Respondent at no stage had specifically warned the Applicant that further instances of inappropriate behaviour when dealing with passengers could result in his termination of employment.

The Commissioner stated, ‘I am satisfied that the absence of such a warning coupled with his relatively lengthy service means the dismissal of Mr Gibbens was unjust. For these reasons Mr Gibbens was unfairly dismissed.’ The remedy was ordered as six weeks compensation.

Companies need to ensure there are ‘reasonable’ procedures in place in relation to internal complaint handling and disciplinary processes. And that such procedures are documented, clearly expressed and easily comprehended by staff. Companies then need to ensure they ‘reasonably adhere to and apply’ such procedures.  It is evident through many of the FWC findings there exists companies who explicitly look to ignore or circumvent the process or inadvertently distort it to achieve a preconceived desired outcome.

Not only must HR ensure company policies and procedures reflect best practice, they must also have a strong voice at the Executive Table such that managers who do not agree with the reasonable procedures (that would have been originally ratified and endorsed by the Board and/or Executive) are not able to sway opinion that a specific desired outcome is so necessary to be achieved that it trumps process.

How well is your organisation managing poor performance, misconduct or complaints handling?  Do you have appropriate policies in place that are followed and reviewed regularly to keep up-to-date with changes in legislation and what is currently considered best practice?  If you would like assistance with policy writing, educating managers about due process or have complex complaints that require a formal investigation that will withstand the scrutiny of the FWC, please contact WPCR .

Further WPCR blogs and short videos about investigations can be found here.

In particular you may want to view: ‘What is a workplace investigation and when should you initiate one?

All parties to a complaint, investigation or disciplinary process deserve to be treated with respect as ‘ every individual, every team and every workplace matters’