Eddie McGuire and The Bystander 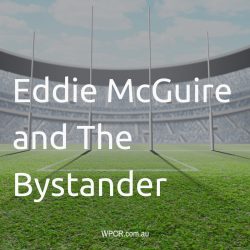 The recent comments made by Eddie McGuire while commentating on the coin toss by Cynthia Banham has had plenty of air time. I question the co-commentators who were laughing and agreeing with Eddie's comments. What is their role as the 'bystander'? We talk about the role of the witness in our bullying and harassment training, we coach staff to speak out and speak up. Mention the phrase: 'The standard you walk past is the standard you accept' and everyone nods in earnest agreement.

Obviously the co-commentators are in agreement with Eddie's comments. Their jibes and laughs are explicit endorsement of what Eddie said. If they had said nothing, their silence would have indicated implicit agreement. If men of such experience could not find the courage to speak up, what does this role model?

Our behaviours are a direct reflection of our values and beliefs. No matter what any of these men might say post event, their integrity now lies bare and exposed for all to analyse.

Where do we all draw the personal line and find courage to make a stand and speak up against such actions? The commentary box is still a workplace. These employees happen to be national role models. Shouldn't there be repercussions for all involved? What should those repercussions be?

I welcome your contributions and comments. As a 'sporting' nation when will we stop ignoring the racist, discriminatory, and/or sexist comments made on and off the sporting field?

When will you stand up and not be the silent and complicit bystander?

It only takes one to lead the way. Let it be you.

When will you stand up and not be the silent and complicit bystander? It only takes one to lead the way. Let it be you.

How important is the role of a Return to Work Coordinator?